Today the City Government of Muntinlupa announced that they have been feted by the Department of the Interior and Local Government (DILG) as one of the 2019 Seal of Good Local Governance (SGLG) awardees for its excellent delivery of public service. This latest development continues to show why Muntinlupa is a standout city among South Metro Manila’s cities.

Despite having a more stringent assessment criteria for the award, the City of Muntinlupa has passed “all-in” seven assessment areas in governance namely: Financial Administration; Disaster Preparedness; Social Protection; Peace and Order; Business Friendliness and Competitiveness; Environmental Protection; and Tourism Culture and the Arts.

To put things in perspective, Muntinlupa City was among the three hundred and eighty local government units (LGU) in the country conferred with the coveted award in governance. In the National Capital Region or NCR, only eight LGUs received this year’s Seal including the cities of Caloocan, Malabon, Mandaluyong, Navotas, Pasay, Quezon City, and San Juan.

Fresnedi thanked the DILG for its recognition of Muntinlupa’s commitment in improving local administration and service delivery for Muntinlupeños.

“We are honored to receive this award as it validates our efforts towards local governance reforms and development. This recognition is an outcome of the collective efforts of dedicated city officials and employees who tirelessly worked in facilitating a transparent, caring, and accountable government for the people,” the mayor said.

As an incentive, 2019 SGLG recipients are set to receive Performance Challenge Fund (PCF) to finance local development projects and capacity development assistance from the DILG.

To be clear, SGLG is the DILG’s progressive assessment and reward system that gives LGUs distinction for their remarkable performance across various pillars. This year’s award is the second SGLG award conferred to Muntinlupa City after receiving the same recognition in 2015.

The DOH conferred the City Government with Best in Rabies Prevention and Control Program, Best in National Voluntary Blood Services Program, and Plaque of Appreciation for the implementation of the Universal Health Care.

Previously, Muntinlupa became the only South Metro Manila city to make the Top 10 of the Most Competitive Highly Urbanized Cities when the results of the 2019 Cities and Municipalities Competitiveness Index (CMCI) were revealed.

More about the NCR city governments and the DILG’s organizing of the 2019 Seal of Good Local Governance awards, I reached out to my contacts at the City Government of Parañaque and asked what was their reaction about their city NOT receiving the prestigious SGLG award. They did not reply at all today.

Those same Parañaque City officials did not reply to my previous inquiry regarding their city’s failure to make the Top 10 of the Most Competitive Highly Urbanized Cities of the entire Philippines as per the results of the 2019 CMCI.

I guess it’s more comfortable for them to remain silent than answering tough questions about competition with other city governments. Now I’ve got to check with one other South Metro Manila city regarding the SGLG awards.

The Alabang Hills Village Association, Inc. (AHVA) announced that the annual Megarahe Sale: Ukay-Okay will be held again this year precisely on September 28 and 29 at the Community Center inside Alabang Hills, Muntinlupa City. 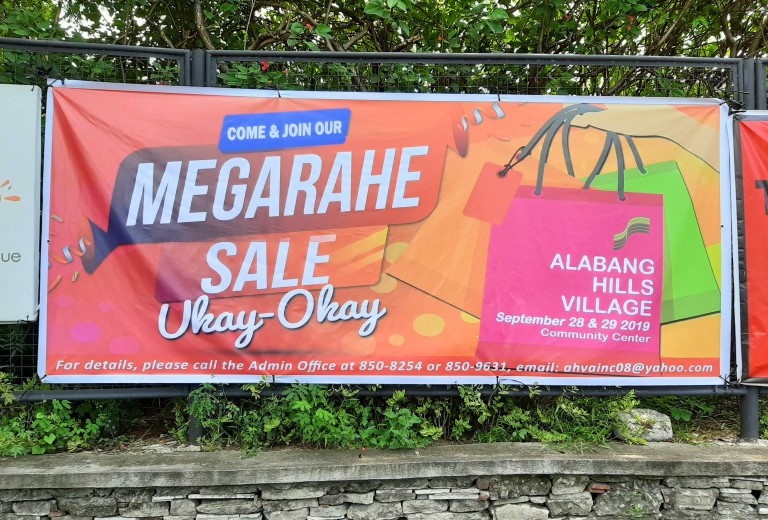 Specifically speaking, Megarahe Sale is a community oriented shopping event that emphasizes the concept of garage sales. The difference is that sellers can use one large community venue to sell their products, hence the words “Megarahe Sale”. The large venue set-up spares the neighbors from the common hassles (pedestrian and vehicular traffic, lack of parking, vehicular pollution) that come with the holding of a garage sale at a house.

At the Megarahe Sale, buyers can look forward to products for sale like bags, clothes, shoes, slippers, books and other household items. The AHVA confirmed that there will also be some stalls of food and beverages set up.

With regards to non-residents who want to visit and shop at the Megarahe Sale, the AHVA personnel confirmed to me that they are welcome to visit and all they need to do is just follow the rules when entering the village. This means non-resident motorists whose vehicles don’t have AHVA-issued car stickers can visit, drop a driver’s license at the village gate, receive a pass and enter.

The Megarahe Sale has been going on for many years now and that alone makes it clear it is a successful village event.