It’s funny how time moves. The year we live in now is twenty-nineteen (2019). That means eighty years from now, the year will be twenty ninety-nine (2099). As a long time geek, the year 2099 reminds me a lot about the short-lived lineup of superhero comics published by Marvel Comics popularly referred to as Marvel 2099 which had a far future, sci-fi setting.

Back in 1992, the comic book industry was riding high on the spending of collectors who seek profit through the trading of comic books. During those days, Marvel released several comic books with special covers (foil, hologram, etc.) which looked so pretty, a lot of people bought those (normally double the prices of regular comic books) believing it would make a collector’s item (instead of reading and enjoying the comic book).

Marvel added more to the comic book speculation frenzy by launching their 2099 series starting with Spider-Man 2099 #1. Shortly after that, they launched the Ravage 2099 monthly series highlighting a protagonist that was original and co-created by the legendary Stan Lee with artist Paul Ryan. There was also hype accompanying Ravage 2099 #1 as it marked Stan Lee’s return as a regular writer. Here is my review of the comic book Ravage 2099 #1.

The story opens with a man chased by local authorities. Labeled a polluter, the armed personnel killed him instead of taking him in alive. This bothers Paul-Phillip Ravage who is the head of ECO Central (under mega corporation Alchemax). His assistant Tiana warned him that there is greater danger and Alchemax can bring down anyone. Of course, Ravage dismisses her concern as he believed in the system he is part of.

Shortly after, Ravage encounters three young guys who approached him with weapons. After scaring away two of them, the last guy – a teenage boy – said words that made Ravage think. It turns out the young guy is the son of the man who got killed in the beginning.

Even though no compelling evidence was presented to him, Ravage had the teenager come with him to go high at Alchemax. There they meet with Anderthorp Henton, the director general of the corporation. After listening to their concerns, Henton reacts to investigate.

“That’s the most shocking thing I’ve heard! If there’s the slightest shred of truth to your accusation, I’ll move heaven and earth to punish the one’s responsible. You have my word on that, commander and you too, young man!”

After separating from the teenager, Ravage decides to go back to his office. Tiana warned him that Henton has targeted him for elimination. Suddenly a mutroid (creature brought in from a forbidden place) appears in front of them starting Alchemax’s move to frame and kill Ravage.

Ravage 2099 #1 was released on October 1992 (cover dated December 1992) for $1.75 with a gold-colored foil cover and it sold well for Marvel that month arguably due to the collector craze as well as die hard fans of Stan Lee. In terms of art, Paul Ryan did a good job visualizing the sci-fi, distant future of 2099 laced with futuristic technology (example: vehicles hovering above ground). He clearly made Ravage look mature while Tiana looked too erotic to be in the office. Ryan’s art on Henton, meanwhile, lacked subtlety and right from the start, he obviously looked evil. When it comes to action, Ryan did a decent job.

As for the writing, I can honestly say that Stan Lee’s style lacked precision and engagement. Clearly his style of writing ended up being outdated by the time this comic book got published. Had Ravage 2099 #1 been released in, let’s say in 1975, then the comic book would have felt more engaging and even futuristic. The dialogue is somewhat lousy as well.

I also noticed how Ravage and the villain Henton looked idiotic with their respective acts. While the culture of impunity in 2099 is undeniable, it still does not justify Henton’s knee-jerk decision to order the elimination of Ravage who in turn failed to notice anything suspicious as head of his department. Tiana ends up being the informer for him.

Another sign of Ravage being not too smart (or at least the lack of precision and intelligence on the script written by Stan Lee) is how unrealistically easy it was for the teenager to convince him that his father was killed WITHOUT PRESENTING ANY COMPELLING EVIDENCE of the incident at all! The teenager only had words…no video, no photos, nothing as evidence!

For a mature man, Ravage was pretty foolish. He never asked the teenager to present any evidence to prove his claims. Instead, he went ahead going to Henton at Alchemax even bringing the young guy with him.

More on Ravage, it was clear that he was doomed as a comic book character even though Stan Lee was involved in creating him. Considering the fact that there were many Hollywood action movies released throughout the 1980s often having a macho guy armed with guns (or capable of doing hard action) as the hero, Ravage ended up looking generic.

It is no surprise that even though Marvel Comics revived somewhat the 2099 universe with new comic books over the past few years, Ravage was not revived. There was simply nothing special with the character nor was his part of the 2099 universe deemed important. 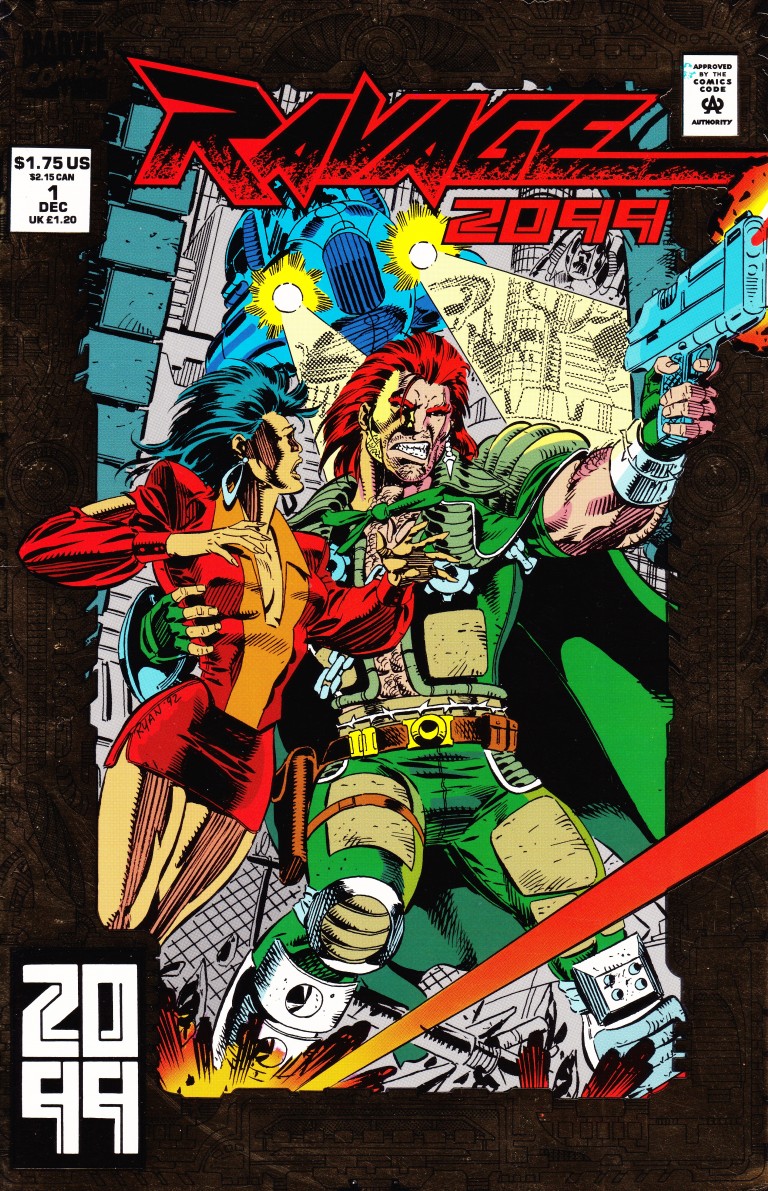 Ultimately, Ravage 2099 #1 is a comic book worth getting way below its cover price. In my view, it is worth fifty cents at best. Ravage is truly a failed hero of Stan Lee’s.