Japan served notice it is all out to regain her pre-eminence in the NTT Asia Cup SUBIT as she entered a powerhouse squad in the 29th edition of the country’s longest running triathlon event outside of the National Championships set at Subic Bay Freeport Zone this Sunday (May 1).

Asia’s No. 3 and 56th in the world rankings Ren Sato is installed as the No. 1 seed in the elite men category followed by Tsudoi Miyazaki, ranked 4th in Asia and 59th in the world.

Completing the pundits’ choices for a podium finish in the distaff side is Australia’s Jessica Ewart-mctigue (16th-CR; 153- WR).

The last time the Japanese ruled the elite men was in 2017 when they romped off with 1st,3rd and 5th positions with the Koreans inserting themselves in-between; and in the elite women in 2015 when they finished 1-2.

Seeing action in SUBIT where top performers gain points for continental and world ranking are hopefuls from aside Japan, Azerbaijan, Hong Kong, and Australia are Chinese-Taipei, India, Singapore, Slovakia and the Philippines.

Conspicuously absent are the Chinese, particularly Mengying Zhong, the back-to-back women’s champion of the last two editions of SUBIT.

The above information was sourced from an official press release issued by the Triathlon Association of the Philippines. Some parts were modified for this website.

For related triathlon stories about the Subic Bay International Triathlon and the SEA Games this year, click here, here, here and here.

Thank you for reading. If you find this article engaging, please click the like button below and also please consider sharing this article to others. If you are looking for a copywriter to create content for your special project or business, check out my services and my portfolio. Feel free to contact me with a private message. Also please feel free to visit my Facebook page Author Carlo Carrasco and follow me on Twitter at  @HavenorFantasy as well as on Tumblr at https://carlocarrasco.tumblr.com/and on Instagram athttps://www.instagram.com/authorcarlocarrasco/

For your reference regarding the 2019 NTT ASTC Subic Bay International Triathlon (SuBIT) Asian Cup that was held this past weekend (April 27 and 28) at the Subic Bay Freeport Zone, here are the post-race photo releases that got published in the Manila Times, Malaya Business Insight and People’s Journal. 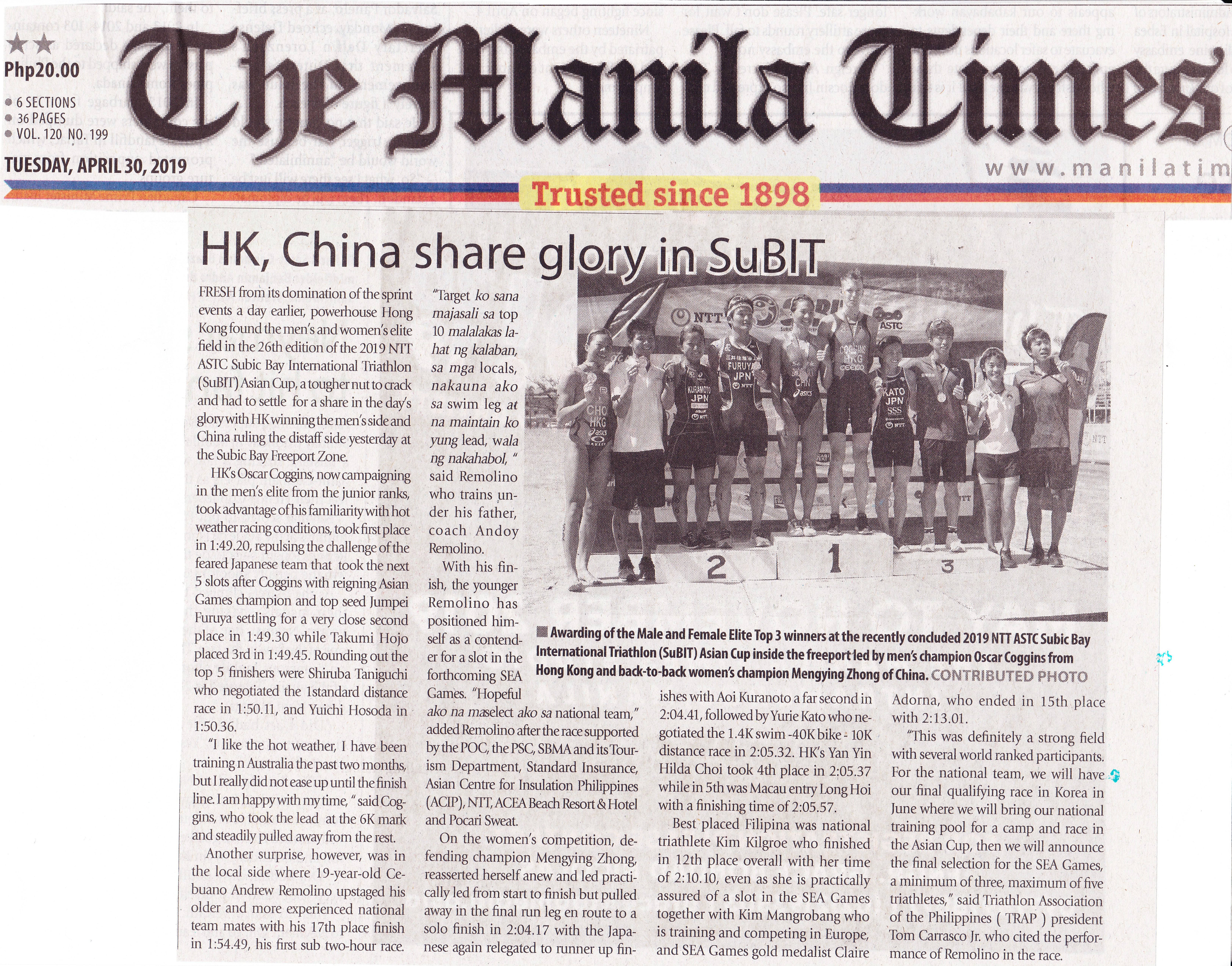 Subic Bay, Philippines – April 28, 2019 – Fresh from its domination of the sprint events a day earlier, powerhouse Hong Kong found the men’s and women’s elite field in the 26th edition of the 2019 NTT ASTC Subic Bay International Triathlon (SuBIT) Asian Cup , a tougher nut to crack and had to settle  for a share in the day’s glory with HK winning the men’s side and China ruling the distaff side  at the Subic Bay Freeport Zone.

HK’s Oscar Coggins , now campaigning in the men’s elite from the junior ranks, took advantage of his familiarity with hot weather racing conditions, took first place in 1:49.20 , repulsing the challenge of the feared Japanese team that  took the  next 5 slots after Coggins with reigning Asian Games champion and top seed Jumpei Furuya settling for a very close second place in 1:49.30 while Takumi Hojo placed 3rd in 1:49.45. Rounding out the top 5 finishers were Shiruba Taniguchi who  negotiated the 1standard distance race in 1:50.11 , and Yuichi Hosoda in 1:50.36.

” I like the hot weather, I have been training n Australia  the past two months , but I really did not ease up until the finish line. I am happy with my time, ” said Coggins  who took the lead  at the 6K mark and steadily pulled away from the  rest.

With his finish, the younger Remolino has positioned himself as a contender  for a slot in the forthcoming SEA Games, : hopeful ako na ma select ako sa national team , ” added Remolino after the race supported by the POC, the PSC, SBMA and its Tourism Department, Standard Insurance, Asian Centre for Insulation Philippines (ACIP), NTT, ACEA Beach Resort & Hotel and Pocari Sweat.

On the women’s competition, defending champion Mengying Zhong, reasserted herself anew and led practically led from start to finish but pulled away in the final run leg en route to a solo finish in 2:04.17 with the Japanese afain relegated to runner up finishes with Aoi Kuranoto a far second in 2:04.41, followed by Yurie Kato who negotiated the 1.4K swim -40K bike – 10K distance race in 2:05.32. HK’s Yan Yin Hilda Choi took 4th place in 2:05.37 while in 5th was Macau entry Long Hoi with a finishing time of 2:05.57.

Best placed Filipina was national triathlete Kim Kilgroe who finished in 12th place overall with her time of 2:10.10 even as she is practically assured of a slot in the SEA Games together with Kim mangrobang who is training and competing in Europe, and SEA Games gold  medalist Claire Adorna who ended in 15th place in yesterday’s race in Subic. Adorna clocked 2:13.01.

” This was definitely a strong field with several  world ranked participants . For the national team, we will have our final qualifying race in Korea in June where we will bring  our national training pool  for a camp and race in the Asian Cup, then we  will announce the final selection for the SEA Games, a minimum of 3 , maximum of 5 triathletes, ” said Triathlon Association of the Philippines ( TRAP ) president Tom Carrasco Jr. who cited the  performance  of Remolino in the  race.