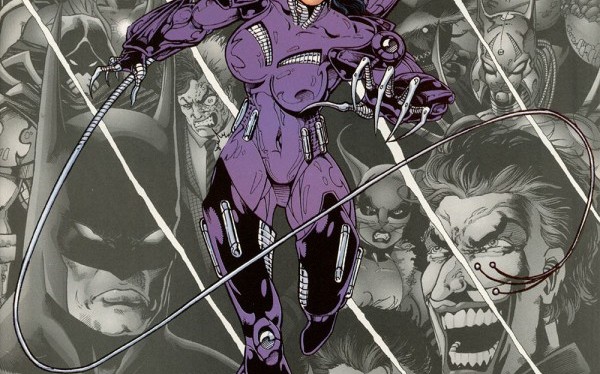 I want to make things clear that I’m not really a fan of Catwoman, nor am I a big fan of Batman and other DC Comics characters related to the Dark Knight. While it is a fact that I grew up reading comic books and watching some episodes of the live-action TV series as well as varied animated series featuring Batman, I did not see much of him encountering Catwoman.

I got to watch the movie Batman Returns in 1992 showing Michael Keaton and Michelle Pfeiffer as Batman and Catwoman. Unsurprisingly Catwoman gained prominence in pop culture as a result of that movie. In 1993, DC Comics launched the monthly series of Catwoman.

Recently, I reviewed Web of Spider-Man #100 which showcased the iconic Spider-Man wearing a suit of armor. As the 1990s was a decade of excess which includes armors as a superhero comic book trend (or fashion craze), it was no surprise that DC Comics had Catwoman featured in armored form.

That being said, we can now take a look back at Catwoman #50, published by DC Comics in 1997 with a story written by Doug Moench and drawn by Jim Balent.

The story begins with Catwoman moving on the rooftop at night. Suddenly a small rocket is fired hitting a chimney near her knocking her out temporarily. After recovering and checking the area near her, she gets hit by Cyber-Cat (first appeared in Catwoman #42). As it turns out, Catwoman knew something about her having worked with Syntex but Cyber-Cat tells her that she’s worker for herself.

Driven by deep anger, Cyber-Cat moves at Catwoman who tries to escape. Catwoman gets hit and suffers slashes on her skin as a result of Cyber-Cat’s vicious attacks. Now losing some blood, Catwoman makes a desperate leap to another building across the street and barely makes it leaving Cyber-Cat behind.

“Run, thief—but your run can’t last forever! I found you once, and I won’t rest until I do it agains—to finish what this night started! And remember –every time you cast your cowardly shadow across a roof…you’ll never know which gargoyle might come to sudden life,” Cyber-Cat tells Catwoman across the gap. “You’re finished, thief! Dead already!”

Badly wounded, Catwoman manages to find her motorcycle at an alley and drives on the way back to her hideout…

I should say that Catwoman #50 surprisingly has depth and a nice combination of spectacle, characterization, intrigue and even some detective story elements. Don’t let the cover fool you into thinking this is a shallow and terrible comic book.

For one thing, Doug Moench carefully crafted a story bringing Catwoman and Cyber-Cat back for a new conflict together, only this time the stakes are much higher given the fact that in the previous encounter, Catwoman put Cyber-Cat to shame. This explains why Cyber-Cat is not only more determined to kill Catwoman but also train harder and use cybernetic means more efficiently.

Rivalry aside, this comic book provides a nice look as to what would happen when a professional thief like Catwoman gets involved with a technology company and causes a disturbance not only in the tech sector but also with industry investigators. Doug Moench managed to insert some scenes exploring Selina Kyle/Catwoman’s social life and her involvement with a cop (who does not even know her secret criminal identity).

As for the Catwoman armor highlighted on the cover, I really like the way the creators efficiently implemented the “Batman approach” to preparation when it comes to assembling the armor done by Catwoman’s friend. While it is predictable that the armor helped improve her ability to fight and keep up with high-tech measures used against her, I found it rather unbelievable that she is able to maintain quick reflexes, move around fast like before and still look like she’s wearing tights (same problem with Cyber-Cat who is actually Christina Chiles behind the suit).

While the realism is not really a factor here, I should confirm that this comic book sure has a lot of action scenes and attractive visuals in the expected big battle between Cyber-Cat and the armored Catwoman. Artist Jim Balent, who helped start this monthly series, confidently paced the action and delivered lots of dynamic shots of hard action.

Catwoman #50 is surprisingly fun to read and has enough depth to its story. It’s far from being brainless, really. With almost 30 pages of story and art, the creative team paced themselves to tell a cohesive story, add a bit of character development and then have Catwoman suited up for the big fight against the obsessive Cyber-Cat.

When it comes to executing the concept of having a hero or a villain using armor for a big conflict or special mission, Catwoman #50 easily beats the stuffing out of Web of Spider-Man #100 big time! Compared to that very disappointing Spider-Man comic book (featuring an armored Spider-Man), Catwoman #50 has more depth, is paced better, paid closer attention to detail (right down to the features of Catwoman’s armor), and has spectacle that is executed and presented better.

If you are seriously planning to buy an existing hard copy of Catwoman #50 (1997), be aware that as of this writing, MileHighComics.com shows that the near-mint copy of the regular edition costs $9. The near-mint copies of the deluxe, the newsstand deluxe and the newsstand editions cost $10, $22 and $17 respectively.