With the unexpected, massive success of the Joker movie (my review here), the DC Comics brand in the field of movies got strong even though the said film was not related at all with the current DC Comics Cinematic Universe. The R-rated, Joaquin Phoenix-led movie grossed over $1,000,000,000 worldwide (without even a release in China) and already it is one of the most profitable movies this year given the fact it was made for well below $100 million. Also, please take note that less than 100% of each ticket sold gets collected by the movie producer.

The future meanwhile looks very promising for fans of DC Comics movies. 2020 will see the respective theatrical releases of Birds of Prey (February) and Wonder Woman 1984 (June) care of Warner Bros. and its creative teams of filmmakers. The Batman (starring Robert Pattinson and directed by Matt Reeves) meanwhile spearheads the cinematic superhero excitement for 2021.

And then there is the other DC Comics superhero movie slated for a December 2021 release….. Black Adam which was recently confirmed through social media by none other than Dwayne Johnson himself.

“I’m honored to join the iconic #DCUniverse and it’s a true pleasure to become, BLACK ADAM. BLACK ADAM is blessed by magic with the powers equal to SUPERMAN, but the difference is he doesn’t toe the mark or walk the line. He’s a rebellious, one of a kind superhero, who’ll always do what’s right for the people – but he does it his way,” Johnson wrote in his Facebook page’s November 15, 2019 post.

Recently, Henry Cavill (Man of Steel, Batman v. Superman and Justice League) confirmed through Men’s Health that he is not yet done with playing Superman.

While there is no clear sign that there will be a new Superman movie coming, I want to express that Warner Bros. and its creative teams should grab the opportunity of bringing Dwayne Johnson and Henry Cavill together on the big screen as Black Adam and Superman respectively.

I’m not saying that Superman should be in the Black Adam movie because I believe that the 2021 movie has its own concept already. Rather they can have the two DC Comics characters together in a future Superman movie with Black Adam as the main antagonist, and have the two fight each other hard.

In the comic books, there have been past battles between the Man of Steel and the Shazam villain. The first was in the 1982 comic book DC Comics Presents #49. Check out the images posted below. 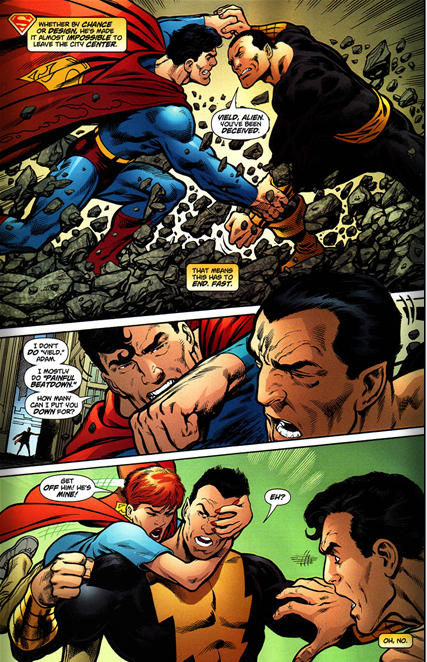 Let’s not forget the fact that Dwayne Johnson is a great attraction when it comes to hard battles on the big screen.

I believe that having Johnson as Black Adam fighting Cavill’s Superman will be a great cinematic attraction. With the right director and the right fight choreographer, such a movie battle will be a lot of fun and make people forget about the disappointing battle of the DC Comics icons in Batman v. Superman (which started strongly but lost energy and its pace worsened). In terms of storytelling, there are enough comic book references to help screenwriters come up with a sensible and believable way to establish a conflict between Black Adam and Superman. Again, there is Batman v. Superman as a cinematic storytelling disappointment to avoid repeating.

Let’s not forget that the movie Shazam was a critical and commercial hit for Warner Bros. and it’s safe to say that we will see more of Zachary Levi reprise the title role in future movies. At the same time, we have yet to see Shazam (formerly called Captain Marvel) face off with Black Adam and have a true, lengthy encounter with Superman.

If you are a dedicated DC Comics fan who wants to see Superman and Black Adam clash together on the big screen, express your support to the filmmakers, to Warner Bros. and also to Henry Cavill and Dwayne Johnson online.