You must have heard about the live-action Bloodshot movie (starring Vin Diesel) that failed to make big bucks at the box office. Then you must have learned about Valiant Comics.

To understand Bloodshot before reviewing the early-1990s comic book Bloodshot #1, here’s a look at the history of Valiant Comics.

In the late 1980s, a team composed of former Marvel Comics Editor-in-Chief, former Allman Brothers Band manager Steve Massarsky and some investors failed in their bid to acquire Marvel Enterprises. Instead of letting their failure stop them, they went on to establish Voyager Communications with the backing of Triumph Capital. Voyager then created the imprint Valiant Comics which went on to launch its first titles in 1991 with Magnus, Robot Fighter (which started in the 1960s in comics published by Gold Key) and Solar, Man of the Atom (also started in the 1960s through Gold Key comics).

Then in November 1992, the same month DC Comics released Superman #75 (The Death of Superman, Valiant released Bloodshot #1 with a cover price of $3.50 (cover dated February 1993) and a very eye-catching chromium cover of Bloodshot drawn by Barry Windsor-Smith.

Now that the history lesson is done, we can finally explore Bloodshot #1 (written by Ken VanHook and drawn by Don Perlin) in this retro comic book review.

The story begins at Heathrow Airport in the United Kingdom. Immediately after a man and a woman (both wearing coats and hats) performed an exchange with a briefcase, two other men (also wearing coats) reacted to them but Bloodshot jumps into the action firing his gun, taking a shot to his arm and grabbing the briefcase. Bloodshot escapes from the airport.

Behind the scenes, an old man meets with Thompson and Otomo informing them that Bloodshot was an experiment of theirs under Project Rising Spirit. The project was disrupted when a young blonde male got to Bloodshot and adjusted one of the devices. The young guy was caught by one of the operators until Bloodshot (still bald and naked) got up, attacked the personnel (freeing the young guy), gathered data from their computers and escape.

The old man noticed Bloodshot’s rampage at Heathrow Airport and was able to identify him. He issues orders to Thompson and Otomo.

“I want him returned—I do not care the condition,” he said.

Looking beyond the eye-catching chromium cover, Bloodshot #1 from the early 1990s is actually engaging and intriguing to read. While it is a superhero comic book, it sure has a dark and gritty tone as well as being noticeably grounded with reality.

With the spectacle, the action is violent and somewhat bloody. It may look tame by today’s standards but back in the 1990s, this was exceptional and it really aimed towards older comic book readers. To put things in perspective, comparing this comic book with the typical Marvel or DC Comics superhero comic book is like comparing an R-rated action film to a PG-13 action or adventure film. Don Perlin’s artwork has a nice flow when it comes to the action and the dialogue scenes.

The writing by Kevin VanHook is good even by today’s standards. I like the way he handled expository dialogue in the first half of the comic book and from that point on, the spotlight was on Bloodshot and his exploits.

There are some weak spots in this comic book. There really was no room for real character development with Bloodshot. The comic book eerily reflected the hero’s approach to doing things: no slowing down, time to take action from here.  That’s not to say it is a brainless read but rather the plotting is decent and relied on the spectacle to make up for the absence of character development. That being said, Bloodshot as a hero who was a victim under his handlers, is hard to like. Based on this comic book alone, he is a rampaging killer looking as evil as the bad guys. It does not help that he is very unstoppable (because of nanites in his blood system which worked to enhance and heal him) and, at least in this comic book, there’s no real sense of danger for him.

When it comes to supporting characters like Sinclair and Malcolm, I can’t help but keep remembering Commissioner Gordon and butler Alfred Pennyworth in the Batman comics.

While it has some flaws in its presentation, Bloodshot #1 is still good and fun to read. On face value, Bloodshot looks like a typical macho action hero with guns but he actually has an interesting personality even though character development was badly lacking in this particular comic book. I also enjoyed the creator’s approach on emphasizing realism by using gangs and secret sinister organizations (which conduct unethical scientific experiments on people) on the background showing that Bloodshot himself is small player in a dangerous game of secret operations. 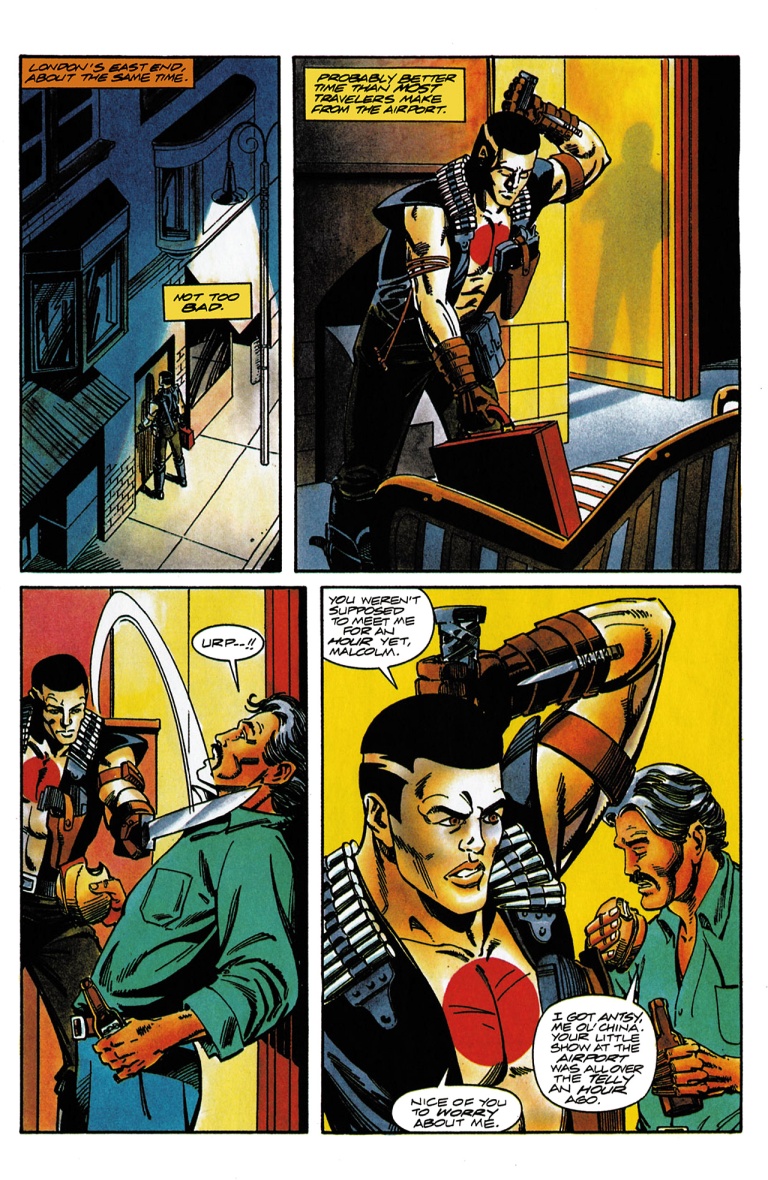 As a standalone story, Bloodshot #1 has more than enough good stuff to make up for its flaws and it is worth reading by today’s standards. This is the true value of the comic book that its flashy chromium cover does not reflect. In other words, this comic book is more than just a gimmick.

If you are a collector, be aware that as of this writing, Bloodshot #1 is worth over $40 for a near-mint copy according to Mile High Comics.

Overall, Bloodshot #1 (1993) is recommended. As a piece of amusement, the comic book is so much better than the Vin Diesel Bloodshot movie. That says a lot!

Thank you for reading. If you find this article engaging, please click the like button below, share this article to others and also please consider making a donation to support my publishing. If you are looking for a copywriter to create content for your special project or business, check out my services and my portfolio. Feel free to contact me with a private message. Also please feel free to visit my Facebook page Author Carlo Carrasco and follow me on Twitter at  @HavenorFantasy as well as on Tumblr at https://carlocarrasco.tumblr.com/ and on Instagram at https://www.instagram.com/authorcarlocarrasco