The above words were from the vigilante called the Night Man, a character co-created by comic industry veteran Steve Englehart (Avengers) and Darick Robertson for Malibu Comics’ Ultraverse franchise. Those words formally opened The Night Man #1 which I’m reviewing here.

To put things in perspective, a vigilante is described as a member of a volunteer committee organized to suppress and punish crime summarily (as when the processes of law are viewed as inadequate) according to Merriam-Webster dictionary. To put it broadly, the vigilante is a self-appointed doer of justice.

Published in 1993 by Malibu Comics, The Night Man #1 tells the story of Johnny Domingo, a jazz player whose life changed in the pages of The Strangers #1 (also written by Englehart) in which he (while driving a vehicle) got by a cable car (that was just hit by an energy burst from the sky) resulting a piece of shrapnel embedding into his head.

Perceived by others to be doomed, Domino strangely survived and was well enough to resume his normal life. The difference is that the incident made his eyes dilated permanently which forces him to shield them from bright light.

Just as Johnny walks down the street, he learned he gained an uncanny ability when he hears, for the first time, the evil thoughts of a man (wearing a coat and a hat) planning to kill a lady on Saturday night.

Knowing what heard, Johnny wondered if he was crazy and what if some woman would truly be in danger. He then decides to follow the man with evil thoughts and watch his moves. Eventually Johnny followed the man to a restaurant by the beach and saw him talk with a pretty waitress named Ginger who agreed to a Saturday night date.

Carelessly Johnny approached the man too closely and got noticed, forcing him to run away and got chased until he got into a taxi that drove him away.

A short time later, Johnny starts his new career as a vigilante as the Night Man. 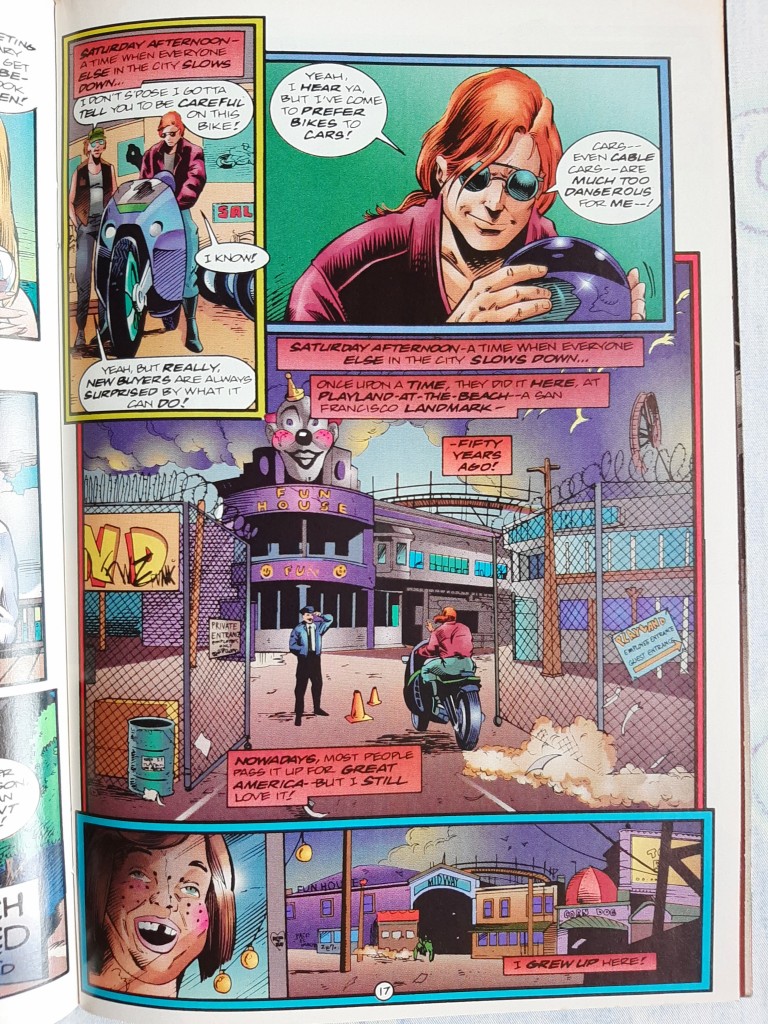 In terms of storytelling, The Night Man #1 was nicely paced and never felt dragging. Within its twenty-eight pages of story, the comic book took gradual steps on introducing Johnny, how the incident with the cable car impacted him, how he became a vigilante for the first time and what went on in his mind as he became the Night Man. Given his rich experience as a writer, it is no surprise that Steve Englehart delivered a solid script.

It was also engaging to see Night Man being a determined yet very vulnerable vigilante. During his first mission in costume, he managed to beat a few bad guys but ended up getting hurt. This kinda reminds me of the vulnerability seen in the cinematic icon John McClane in 1988’s Die Hard.

The art by Darick Robertson, with ink work done by Andrew Pepoy, was nicely crafted. The civilian and vigilante looks of Night Man were well defined. The visualization of action nice and when Night Man gets hurt, he really looks in pain.

Going beyond Night Man, this comic book has a short preview (five pages, including credits) of Rune, a character created by Barry Windsor-Smith. Rune is described to be a voracious killer whose prey is all humanity and he is an alien leech who despoils the flesh of victims, culling their lifeblood into the essence of power. Rune is also a dying creature fighting for survival against the malignant disease burning inside of him.

Overall, The Night Man #1 is a worthy addition to your comic collection if you are interested in the Ultraverse (which is still kept in limbo by Marvel which acquired Malibu Comics in the mid-1990s) or are interested in vigilante-type superheroes. If you are obsessed with whatever Barry Windsor-Smith created, then the Rune stuff is a must-get.

The Night Man #1 is recommended.

One thought on “A Look Back At The Night Man #1”